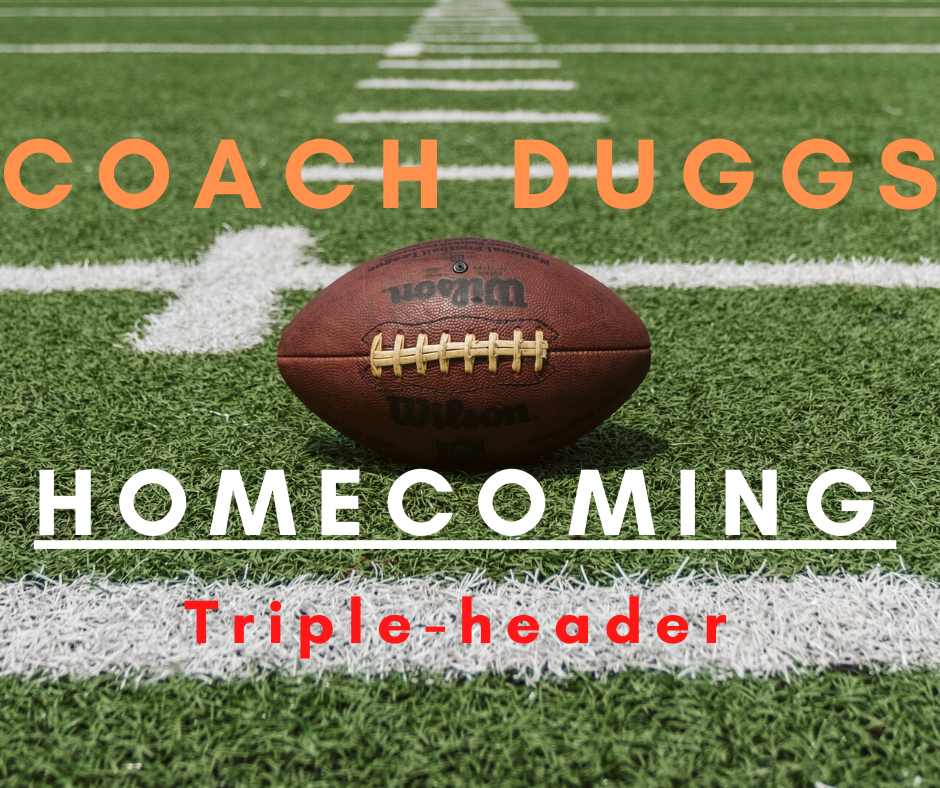 So we had a tripleheader on the slate tonight for Coach Duggs and his Toledo team.

After 2 wins to open the season, Toledo had 2 bye weeks, leaving them ranked #5 in the nation going into the tripleheader.

The first game was a road game against Bowling Green.

Duggs was confident saying, “I’m going to win every game tonight. I hope you guys are hungry, 50 Burgers.”

Considering we have 3 games to cover here I am going to be a little less in the weeds about the specific details of every single drive.

I’m sure you can understand.

Right off the bat, Duggs went for it on 4th and 10 from his on 20 and QB Cade Shippley completed a 42 yard pass to RB Bam Bam Calloway.

A big gain on a pass to TE Bubba Butt brought the Rockets into the red zone.

RB Bo Hammer capped off the drive for Toledo with a 2 yard TD run.

That was the only big play for the Falcons as they were forced to kick a field goal from 40+.

On Toledo’s next drive Shippley uncorked a pass to star WR Prince Fontana for a 60 yard TD.

To be honest, this Bowling Green team was terrible, anything less than a blowout would be an embarrassment for Duggs.

Their best play on offense was Sanders running the ball himself.

WR Eric McCarthy made a couple quick catches to set up star RB Joey Stanford with a 1 yard TD.

Duggs’ defense did not put up much resistance on that drive.

Toledo’s offense continues to lean on RB Bam Bam to gain the majority of their yardage on offense through runs and catches.

RB reliance is a staple of Duggs’ offense no matter what school he goes to.

Duggs was very transparent with why he was force-feeding his RB in saying, “We gotta get Bam Bam the Heisman.”

A huge Sanders scramble on the ensuing drive brought Toledo into field goal range as the 2nd quarter clock ran down, and a roughing-the-passer penalty brought the Falcons to Toledo’s 12 yard line.

Robert Roberto came up with a huge sack to force a Bowling Green field goal.

Adrian Cody returned the kickoff 65 yards before getting tackled with no time left in the half.

Bowling Green’s first drive of the 2nd half ended in a field goal after Duggs’ defense bent but didn’t break.

Toledo continued their excellence on kickoffs with a 50 yard return by Fontana, after Cody left the game with am injury.

Toledo forcing Bowling Green into a 3-and-out on their next drive effectively ended the game.

An 18 yard strike from Shippley to WR Sisqo Bey put the game away.

Duggs’ defense got a strip sack on Sanders on Bowling Green’s next drive, and the ensuing scoop-and-score led to a BigBoyTouchdown.

Sanders broke off a 32 yard run on Bowling Green’s final drive before throwing an interception.

Total domination from Duggs and Co.

Shippley threw an interception on the next play on a deep pass into the end zone trying to secure that ever-elusive 50 Burger.

The next game on the slate was some more MACtion conference play seeing Toledo playing a home game against Northern Illinois University.

NIU was forced to punt after their first drive led to a whole lot of nothing.

Toledo put together a clinical second drive mixing in runs and passes in equal doses, before Bam Bam ran it in for a 2 yard TD.

Beau Harper ran in a 19 yard TD that, for some peculiar reason, Duggs told his defense to let NIU score.

The decision paid off when Shippley found Bam Bam on a 7 yard TD reception with 32 seconds left in the half.

Bowling Green’s first drive of the 2nd half led to a 3-and-out.

Toledo’s next drive was defined by, you guessed it, a lot of Bam Bam.

He finished off the drive with an 8 yard rushing TD.

Gona be honest, this game was a snoozer.

A 22 yard pass over the middle from Shippley to Butt set up a 20 yard TD reception from Ken Moore.

Duggs’ offense was clicking on all cylinders.

On Toledo’s final drive a 42 yard deep pass to Sisqo Bey set up ANOTHER short TD run from Bam Bam.

Next up Toledo went on the road to play the Miami (of Ohio) University Redhawks.

Ryan Graham opened the game with a 46 yard reception for Miami.

Star QB Ryan Benjamin followed that up with a 16 yard run.

Michael O’neal punched in a 3 yard TD run to give Miami an early lead.

Duggs got back to this play-calling roots on Toledo’s next drive with a bunch of Bam Bam runs, then a 28 yard TD on play-action from Shippley to Butt.

Duggs’ defense stood tall and forced a 3-and-out on Miami’s next drive.

Miami returned the interception inside the 5 yard line only to FUMBLE AND TOLEDO RECOVERED.

And then a review overturned the ruling on the field and Miami kept the ball hahahahahah.

Miami ran in a short score to push their lead to 14.

He proved that by calmly driving down the field and finding Bam Bam for a 7 yard receiving TD.

Shippley ran in a 2 yard rushing TD as the 2nd quarter clock expired.

What an end to the 1st half.

Prince Fontana started the 2nd half with a bang, 56 yard kickoff return.

The entire drive was Bam Bam runs until he found pay dirt from 10 yards out.

RB Michael O’neal broke off a 25 yard run for Miami as Duggs admitted, “The doink rattled me, I can’t lie. I’m back to being rattled.”

Despite this Duggs’ defense was able to hold Miami to a field goal.

Toledo moved into Miami territory on a 17 yard pass to TE Butt.

Shippley then found Bam Bam on a 9 yard TD pass.

Benjamin threw a 12 yard TD to WR Young with 3:29 remaining.

Shippley capped off the game with his 4th passing TD as time expired and after a failed 2 point conversion attempt: