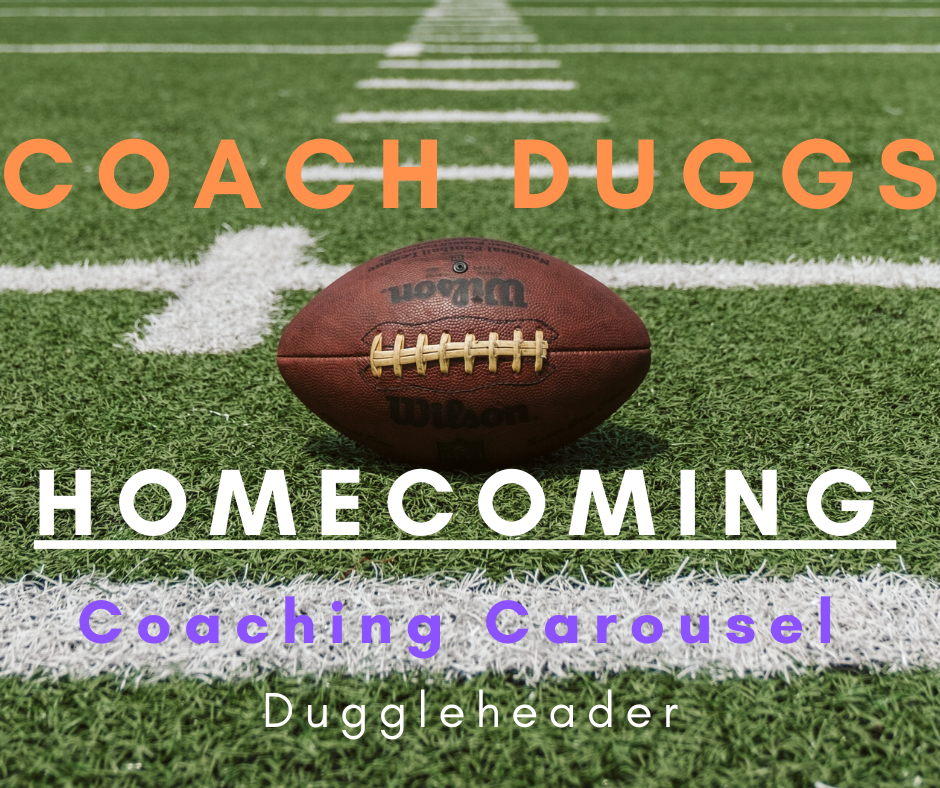 Nonetheless he entered the Coaching Carousel to explore his options.

He declined contract offer from Oregon.

Duggs makes his triumphant return to the MAC.

Back to where it all started.

Duggs was quoted saying, “We’re going to be at Toledo for a week and a half, shut up!” when he got some pushback from his supporters for his decision to return to Toledo.

Duggs won a MAC Championship and lost a Sugar Bowl to Georgia in his one year at Toledo as Offensive Coordinator.

Duggs made it clear that Toledo will be a “One season stop. I’m here to put Toledo on the map.”

Duggs’ season started with a road game at the Coliseum to square off against #23 USC.

USC star WR Jimmy Williams picked up a quick first down with an 8 yard reception on the Trojans’ opening drive.

RB Anthony Bullock was the other star on USC’s offense.

USC was moving the ball through the air with relative ease on their first drive.

Robert Roberto got a huge sack on USC QB Anthony Williams forcing a 3rd and 17.

USC failed to convert on 3rd down and settled for a field goal.

WR Sisqo Bey caught a 15 yard pass bringing the Rockets to the goal line before RB Brock Hemi ran the ball in for a 1 yard TD.

Duggs was overhead complimenting Toledo’s first drive and said, “Air Duggs is back!”

WR Kendall Goolsby picked up a 12 yard reception for a first down on USC’s ensuing drive.

Goolsby followed it up with a 29 yard catch a couple plays later.

WR Sean Mitchell picked up another 20 yard and Duggs’ defense was getting diced up.

Anthony Williams tossed a 20 yard touchdown over the middle to Goolsby and just like that:

Cade Shippley showed he is pretty fleet of foot for a QB picking up a first down for Toledo on a ten yard scramble.

A 19 yard reception by Anthony Smith brought Toledo to the USC goal-line.

Bam Bam punched it in for a 1 yard TD.

Not much defense was being played at this point in the game.

A couple big runs from Anthony Bullock followed by a completion to USC’s tight end whose name I didn’t catch brought USC into the red zone.

Bullock scampered in for a 3 yard TD.

Adrian Cody got another solid 30 yard return on the kickoff.

Shippley completed a 30 yard pass on Shark Wheel to Bam Bam and then almost threw an interception with the first half clock winding down.

A couple of huge dropped passes kept Toledo out of field goal range.

Cody opened the the first half with a 43 yard return. He may prove to be a huge weapon all season for the Rockets on kickoffs.

Shippley found star WR Prince Fontana for a 12 yard catch to move the chains for Fontana’s first catch of the game.

Bam Bam finished off a strong drive from Duggs and Co. with a 2 yard rushing TD.

Duggs’ defense continued to struggle as Williams completed 17 of his first 19 passes.

Goolsby got ANOTHER huge gain on a 23 yard reception moving the Trojans into Toledo territory.

Shippley showed off some moves on a 20 yard gain right before Bam Bam got leveled on a 9 yard rushing gain.

This was a complete offensive shootout. Neither time was putting up any resistance on defense as we headed into the 4th quarter.

After a couple of strong Bam Bam runs, Shippley broke a tackle on the way to a 12 yard rushing TD from the QB.

Robert “Man So Nice They Named Him Twice” Roberto picked up his second sack of the game forcing a 3rd and 20 that USC almost completed after Bullock gained 17 yards on a screen pass.

USC punted and Toledo had a golden opportunity to salt the game away with a score.

Duggs called for a bunch of runs from Bam Bam to drain the clock as Bam Bam continued to pick up chunk yardage.

After a few solid gains Bam Bam broke out for a 20 yard gain that effectively ended the game.

Roberto finished the game off with his 3rd sack as the clock expired.

A solid statement win for Duggs and Toledo in a game with little defense, neither team turned the ball over.

The first play of the game resulted in a 75 yard TD catch for TE Duane Hill.

Adrian Cody continued his insane kick returning ways running the ensuing kickoff 52 yards before getting shoestring-tackled from behind.

Cade Shippley threw a strike to Prince Fontana for 18 yards and a 20 yard reception from Bo Hammer over the middle of the field gave Toledo a 3rd and 1 that Bam Bam easily converted.

Bam Bam then ran in a 6 yard score.

Star TE Bubba Butt made his first? catch of the season over the middle for 23 yards.

Bam Bam finished off the drive for Toledo with a short TD run.

QB Dwayne Wesley threw a 35 yard pass to WR Duane Hill to bring the Gators into the red zone.

Wesley narrowly avoided a sack from Robert Roberto before throwing a 9 yard strike to the corner of the end zone.

Cody again returned a kickoff for 46 yards. He’s averaging like 35 yards on kickoff returns early in the season.

Bam Bam continued to gain easy yardage almost every time he was handed the ball.

Seems like Coach Duggs took his “4 Yards and a Cloud of Duggs” offensive philosophy from Knoxville to Toledo.

Bam Bam punctuated an easy drive for Toledo with a 3 yard rushing score.

Bubba Butt opened up the 2nd half with a 22 yard TD reception on Toledo’s first drive.

Big rushing gains from Joseph and Wesley brought the Gators into striking distance with a chance to cut the Rockets’ lead in half.

And cut the lead they did when Joseph pummeled his way to a 2 yard TD run.

After a drive littered with Bam Bam run after Bam Bam run, Bo Hammer punched in a less-than-1-yard TD run.

Michael Dykes ran the ensuing kickoff 50 yards to give Florida a glimmer of hope.

Wesley immediately threw a 34 yard TD to Duane Hill to make it 35-28 Toledo.

If Duggs has any chance of winning the Natty with Toledo, his defense needs to step up.

Toldeo’s final drive was defined by, you guessed it, a million Bam Bam rushes before falling jussssttt short of another TD as the clock expired.